No this is unfortunately not a recipe, this is a horror story (not really, but as close as I get) and yes it has given me nightmares. 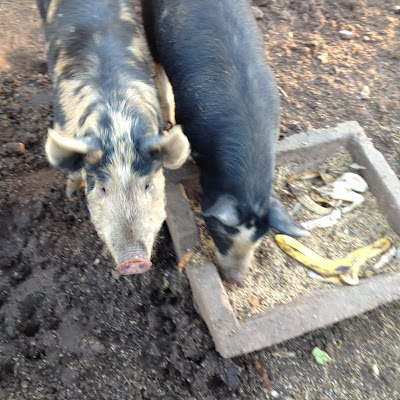 We have 2 pet pigs, one girl (Sow) named Alana, and a boy pig (Boar) named Leopard. Over the last few months I have become quite fond of my pigs, they've got their own little personalities and they are very cheeky. We have been letting them out in the house paddock during the day, and in the evening they see me coming with the scrap bucket and put themselves in their pen, have a feed, a late afternoon camp in the sun, before they tuck themselves into their tin drum together at night.

A few weeks ago one of my chooks went missing, I put it down to foxes as there's been a few about. A couple of days later another chook went missing, it was at night and in the morning there were feathers in the pig yard. Now the two yards are next to each other and I had noticed the pigs digging around the fence line but hadn't thought anything of it, the chooks however have decided to start escaping that way, and unfortunately the pigs decided that the wayward chook that came wandering into their yard was a tasty morsel.

I was initially skeptical that it was the pigs, I gave them the benefit of the doubt, then one day I let them both out in the house paddock together (the 2 remaining chooks and the 2 pigs). What took place next was my stuff of nightmares. The pigs cornered the chooks in the chook yard, working as a team the had them cornered and went in for the kill. I was screaming 'Stop, Stop' but the pigs were focused on their goal and as I've since been told 'they're not like dogs you know, they're not going to listen'! One chook came squawking out of the yard at full pace, ran straight into the garage where I promptly shut the door to keep her safe. The second chook I thought was a goner, she had escaped to another corner but the pigs had followed and I hadn't heard a squawk from her, then like Lazarus rising she came flapping out of the yard at full pace, I opened the garage door to let her in and quickly shut it down to keep her safe. Needless to say the chooks and I are both traumatised.

The pigs aren't quite big enough to become Christmas Pork and Ham yet, so we have them for a little longer. I now only let either the chooks or the pigs out, never both and make sure the kids don't smell or look too appetising when we feed them at night! I have been wondering though whether my pork will taste a little like chicken and if I'll be sad eating my pork knowing the reason is tastes so good is because it was fattened on chooks?

Thanks for your comment. It means so much to know you're reading and have taken the time to comment. Have a wonderful day.

A Bit About Me

Nat - Muddy Farmwife
Hello, How you doing? Thanks for stopping by. I'm Nat, I live on a farm west of the Castlereagh River with my wonderful Muddy Hubby, 3 Muddy Girls and 1 Muddy Baby Boy. I am a part-time Speech Pathologist and full-time Mum. My blog is a way for me to explore my thoughts and share bits and pieces of our life on the land West of the Castlereagh with 4 Muddy Kids and my Muddy Hubby.